Full Name
Steve Aoki
Job Title
Grammy-nominated DJ and Producer
Speaker Bio
Steve Aoki is many things—Grammy-nominated music producer, artist, fashion designer, entrepreneur and NFT visionary—but there’s one key thing that connects everything he does. Aoki, one of the most successful American cross-genre artists and a deeply forward-thinking creator, brings a sense of community to all of his work, offering shared spaces and connections for like-minded fans and fellow artists.

At the core of everything is Aoki’s music, which he releases both under his own name and through a number of aliases. Since the release of Wonderland, his 2012 debut solo album, which earned him his first Grammy nomination for Best Dance/Electronica Album, Aoki has collaborated with an impressive list of varied artists, including BTS, Maluma, Linkin Park, blink-182, One Direction’s Louis Tomlinson, Machine Gun Kelly, Lil Uzi Vert, 2 Chainz and Daddy Yankee. He boasts 17. 2 million monthly listeners on Spotify, with a 77 million average monthly reach across all his platforms. He’s released three Platinum singles, six Gold singles and has produced over ten Top 10 radio records. His label, Dim Mak, is credited with discovering influential acts like Bloc Party, The Chainsmokers, Bloody Beetroots and The Kills.

After unveiling four Neon Future albums, the most recent being Neon Future IV in 2020, Aoki’s next album will open the door to a new adventure. His latest single, “KULT,” brings Aoki together with grandson for a dynamic track that hints at what's to come.

“To me, ‘KULT’ is the benchmark sound of where this new album will be going,” Aoki explains. “It has some punk-y elements and it’s always about lyrics and the hook. If you can get people to sing something that makes them fill with angst and it evokes some energy, that’s a successful song. It’s like our own social club that lets everyone be part of a shared world. This album will have that synergy, where everyone is part of this club.”

Performing live has always been an essential aspect of Aoki’s music career. Prior to the pandemic, he counted over 250 tour dates per year. He also holds the Guinness World Record as the “Most Traveled Musician in a Single Calendar Year,” an accolade he earned in 2012. In addition to multiple headlining tours, he’s performed at nearly every top festival around the world, including Coachella, Ultra Music Festival, Lollapalooza, Fuji Rock Festival, Tomorrowland and Electric Daisy Carnival. Ultimately, Aoki wants to work in exciting spaces with exciting artists, and to bring the spirit of connection and discovery to everything he does.

In 2022, Aoki launched A0K1VERSE, an NFT membership community, powered by the Passport, that welcomes his fans to both virtual and real-world experiences. The metaverse community draws people into Aoki’s all-encompassing network, drawing together Aoki friends and family in an innovative way. For Aoki, who has spent the past year becoming more and more involved in the NFT space, it’s essential to remain forward-thinking as he continues to grow his brand. That sensibility also plays into OddKey, an NFT marketplace for creators and aficionados of original sci-fi, fantasy and comic-inspired digital art and music, created by Aoki alongside comic book legend Todd McFarlane (creator of Venom and Spawn). The idea for OddKey, was driven by Aoki’s desire to build a niche ecosystem for people of similar interests to find each other. It plays into his goal of magnifying smaller worlds instead of simply playing into mainstream culture. “I love tapping into these worlds with a lot of passion,” he notes. “That gives me a purpose. I want to go where the passion is and make some noise there.”

“When I make music in the studio or when I’m working on something in tech, I’m really obsessed with the future,” he explains. “Where are we going? How do we help create the building blocks of culture? With NFTs you really are stepping into a brand new world—you’re creating outside the box. I love that kind of energy and I love the community of other people who feel the exact same way. It’s exciting to be part of something fresh, brand new and futuristic, and being early enough that it feels like a risk.”

Aoki has continued expanding in niche spaces in the fashion and gaming worlds, as well. The artist designs the vibrant Aoki 1 of 1 clothing collection, which features one-of-a-kind apparel items alongside Dim Mak’s ongoing collaborations with IPs like Dragon Ball Z, The Matrix and Godzilla. He is also the co-founder of MetaZoo, a wildly successful trading card game that launched in March of 2021. Aoki approaches each new endeavor with the same sense of dedication he’s put into his past achievements, including his critically-acclaimed 2019 memoir BLUE: The Color of Noise and THE AOKI FOUNDATION, which Aoki founded in 2012 to support organizations in brain science and its research. In whatever space he enters, Aoki offers a community for those who need it most.

“I love the idea of partnering up with someone with a completely different mindset on life,” he says. “Almost everything I do is some level of collaboration, whether it’s fashion, technology, music, art or culture. I love this idea that we can come together and put aside the things from our past that may have hardened or jaded us, and just be free. We can try something completely unhinged together. Whenever I’m struggling to find my voice, I go back to when I was a kid and remember how important it was to find a group of people who all believed in the same thing—and believed in it passionately.”
Speaking At
The A0K1VERSE, NFTs and the Future of Fan Engagement 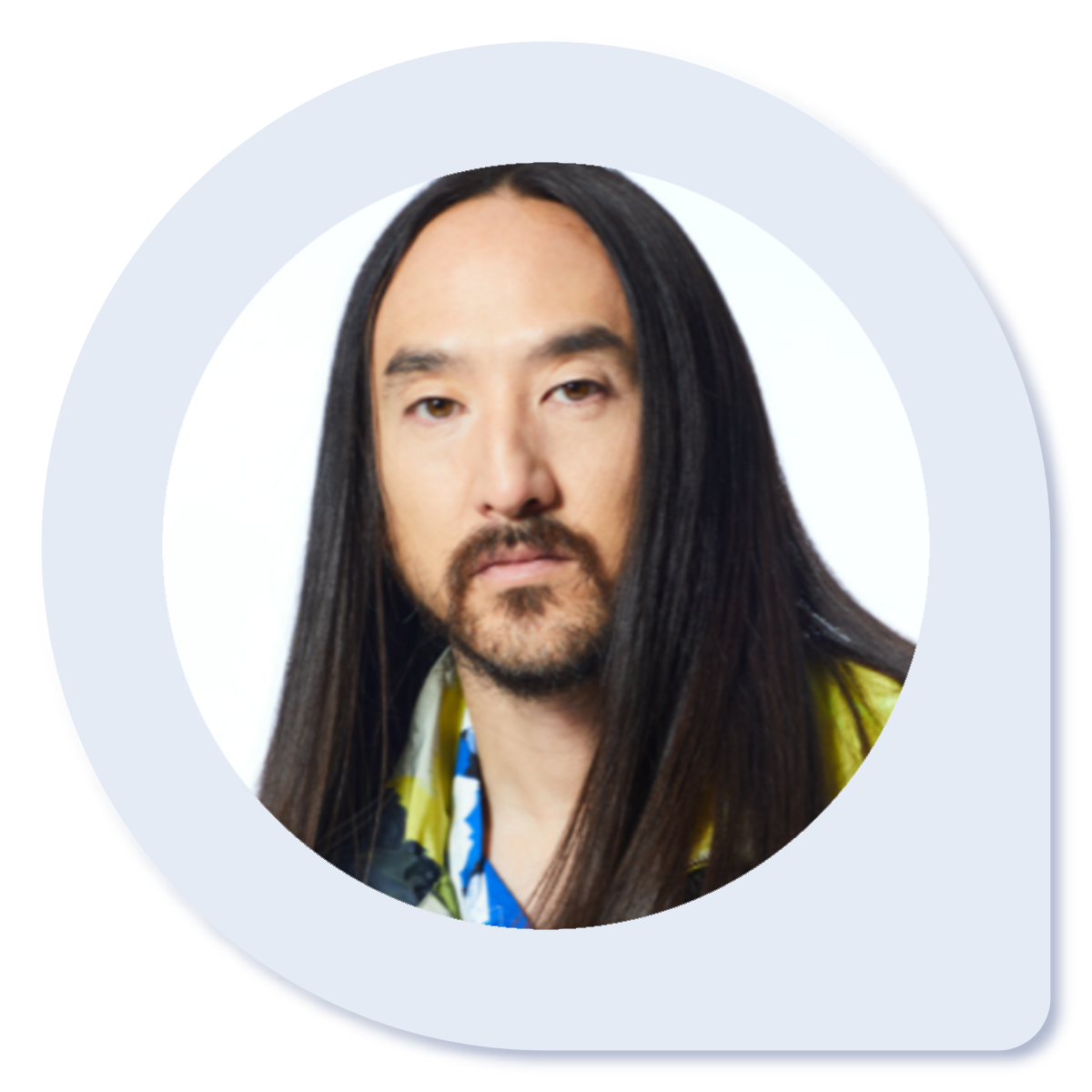