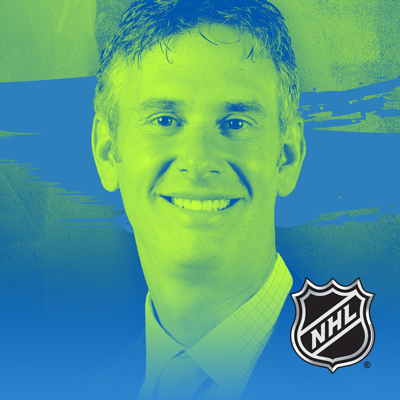 Full Name
Keith Wachtel
Job Title
Chief Business Officer and Senior Executive Vice President
Company
NHL
Speaker Bio
As Chief Business Officer, Keith Wachtel is responsible for day-to-day leadership and management of all revenue-generating initiatives for the NHL and has been a key contributor to the League’s path to more than $5 billion in annual revenues. He leads all global corporate partnership efforts for the NHL and assumes P&L responsibility across numerous business areas.

The tremendous success of the NHL partnership business helped in securing the recent historic and innovative seven-year television, streaming and media rights deals with the Walt Disney Company and ESPN, and WarnerMedia’s Turner Sports, which begin with the 2021-22 season and continue through the 2027-28 season. The tremendous success of the League’s partnership business was also integral to fostering robust broadcast and media rights agreements with NBC/Comcast (2011), Rogers (Canada) (2013) and Disney Streaming Services (DSS) (2015). As part of these agreements, Wachtel spearheaded North American digital sales partnerships with NBC Sports, Rogers and DSS for all NHL.com, NHL Network and NHL Mobile ad sales to non-League partners.

Wachtel has also led the NHL to new revenue segments and partnership opportunities, most recently in the technology and sports betting categories. He was instrumental in the negotiation and planning of strategic, innovative collaborations with industry-leading technology providers to improve and enhance the NHL, including AWS, Verizon, Apple and SAP, as well as a partnership with SportsMEDIA Technology (SMT) to develop Puck and Player Tracking technology. In addition, Wachtel has been a driving force in the NHL’s progressive approach to sports betting, securing the League’s first official sports betting partnership with MGM Resorts International, as well as multi-year strategic relationships with FanDuel, William Hill, Bally’s, Betway and Tipsport.

Prior to joining the NHL, Wachtel was Director of Business Development for the National Football League. During his six seasons with the NFL, Wachtel was involved in securing more than $300 million in long-term League partnerships. In addition to developing corporate sponsorships, other responsibilities included the sale of the NFL’s Super Bowl Halftime property and the League’s extensive calendar initiatives such as the NFL Draft, NFL Opening Kickoff and the Pro Bowl.

Prior to joining the NFL in 2001, Wachtel was the Director of Integrated Sales & Marketing for SFX Sports Group. Before working on the properties side of the business, Wachtel spent eight years from 1992-99 within some of the largest media buying agencies specializing in sports including Young & Rubicam, Bates U.S.A and Zenith Media.

In 2009 and 2010, SportsBusiness Journal named Wachtel as one of the Forty Under 40. A native New Yorker, Wachtel lives in Westchester, NY with his wife, Alison, and their two children. He graduated from the George Washington University with a bachelor’s degree in marketing and later went on to earn his Masters of Business Administration from Fordham University.
Speaking At
Your Logo Goes Here
Close