In addition, Clark oversees original content development for NASCAR, including digital and social media, NASCAR Productions and an entertainment division based in Los Angeles.

Clark is also responsible for NASCAR’s gaming strategy and creating fan engagement opportunities via esports and sports betting. He oversees the eNASCAR brand and racing series partnerships with iRacing and 704 Games.

In 2020, Clark led the creation and launch of the eNASCAR iRacing Pro Invitational Series in collaboration with iRacing. The virtual racing series filled the live sports void during the onset of COVID-19, and six of the seven races on FOX/FS1 now rank as the most-watched esports programs in television history.

Clark joined NASCAR in July 2012 to help oversee the re-launch of the digital platform after NASCAR brought its digital rights back in-house. Under his leadership, NASCAR Digital Media introduced fans to emerging engagement platforms such as augmented reality, virtual reality and 360-degree video.

Additionally, Clark leads the organization’s data strategy team, focused on both fan acquisition and the segmentation of data for strategic use across the NASCAR industry.

In 2009, Clark joined GSI Commerce to lead marketing for online retailers such as Dick’s Sporting Goods and Hanes. Shortly after, he was responsible for managing sports league partnerships with the NFL, NBA, MLB, NHL and NASCAR.

A native of Mechanicsville, Va., Clark attended NASCAR races at Richmond Raceway as a child. He received a bachelor’s degree in marketing from Kansas State University in 1998.

He is an active supporter of the Humane Society of Charlotte, The Hole in the Wall Gang and various other animal and environmental causes.

Clark and his wife, Bita, live in Charlotte, N.C. with their son, Myles.
Speaking At
Metaverse: Digital Marketing’s New Frontier 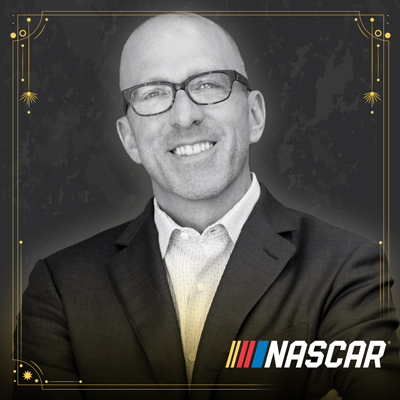